Animals is divided into the above six main categories of Amphibians, Birds, Fish, Invertebrates, Mammals and Reptiles.

Amphibians were the first vertebrates to make the move from life in water to life on land approximately 370 million years ago during the Devonian Period evolving from lobe-finned fishes.

Amphibians include newts and salamanders, frogs and toads, and caecilians.

There are thought to be between 5,000 and 6,000 species of amphibians alive today.

Amphibian species are in decline around the world. Other invasive species, habitat destruction, disease, climate change and toxins are all contributing the decline in the number of amphibians.

Birds evolved from reptiles during the Mesozoic Era about 150 million years ago.

Today more than 9,000 species inhabit virtually every terrestrial habitat on the planet.

Birds have a number of characteristics that sets them apart from other vertebrates such as feathers, bills and a furcula.

Fish were among the first vertebrates, i.e. animals with a backbone or spine, to evolve.

The ray-finned fishes are the most diverse of all vertebrate groups, with around 24,000 individual species. There thought to be about 810 species of cartilaginous fish and 8 species of lobe-finned fish.

The earliest known fishes were the ostracoderms which are now an extinct but were a group of jawless fish that featured during the Cambrian Period about 510 million years ago.

Other early fish include the conodonts and the agnanthans such as the hagfish.

Some fish have evolved to form jaws and fish species diversified into a huge number of species of fish including cartilaginous fish, ray-finned fish and lobe-finned fish.

Invertebrates are categorised more by what they lack, i.e. a backbone, than by characteristics they share.

Invertebrates include animal groups such as sponges, cnidarians, flatworms, molluscs, arthropods, insects, segmented worms, and echinoderms as well as many other lesser-known groups of animals.

The first animals to evolve on our planet were invertebrates. Fossil evidence of invertebrates dates back to the late Precambrian period, 600 million years ago.

Invertebrates evolved from single-celled microorganisms and have diversified into countless forms. It is estimated that around 97 percent of all species alive today are invertebrates.

Mammals are vertebrates (animals with a spine or backbone) that evolved from reptiles during the Jurassic Period about 200 million years ago.

The first mammals were nocturnal insect eaters that resembled modern-day shrews. Today mammals range in size from the minute bumblebee bat which measures a mere three centimetres in length to the magnificent blue whale which can measure 33 meters head to tail.

For around 130 million years mammals remained small in size and numbers and lived in a world which was largely dominated by dinosaurs.

Around 65 million years ago there was a massive change in climate which caused the extinction of more than two-thirds of the animal species on the planet at the time, including the dinosaurs.

Some mammals managed to survive this massive climate change and subsequently when on to diversify and take advantage of new habitats which had often previously been dominated by other animals such as the dinosaurs.

Today there are though to be around 5,400 species of mammals occupying every continent on the globe.

Humans fall in the mammal category.

Reptiles are cold-blooded vertebrates which are animals with a backbone or spine. Replies that evolved from amphibians about 340 million years ago during the Carboniferous Period.

Two characteristics distinguish early reptiles from amphibians which is that reptiles have scales and the ability to lay hard-shelled amniotic eggs.

Wildlife Parks a superb day out to learn about and see the animals for around the planet on which we live! 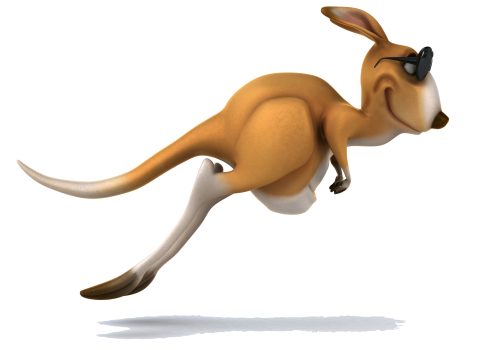 Kippa is very quick and can jump over fences with ease.

Kippa moves around by jumping and travels at up to speeds of around 30mph and each jump is around 15 feet or approximately 4.5 metres.

His parents named him”Kippa” as he spent nearly six months in his Mum’s pouch when new born only popping his head out occasionally. So they thought he was always kipping or sleeping when born.

"Kippa" says... "Thank You for Visiting Our Site"

We Hope You Found Great Places To Visit

We use cookies on our website to give you the most relevant experience by remembering your preferences and repeat visits. By clicking “Accept All”, you consent to the use of ALL the cookies. However, you may visit "Cookie Settings" to provide a controlled consent.
Cookie SettingsAccept All
Manage consent

This website uses cookies to improve your experience while you navigate through the website. Out of these, the cookies that are categorized as necessary are stored on your browser as they are essential for the working of basic functionalities of the website. We also use third-party cookies that help us analyze and understand how you use this website. These cookies will be stored in your browser only with your consent. You also have the option to opt-out of these cookies. But opting out of some of these cookies may affect your browsing experience.
Necessary Always Enabled
Necessary cookies are absolutely essential for the website to function properly. These cookies ensure basic functionalities and security features of the website, anonymously.
Functional
Functional cookies help to perform certain functionalities like sharing the content of the website on social media platforms, collect feedbacks, and other third-party features.
Performance
Performance cookies are used to understand and analyze the key performance indexes of the website which helps in delivering a better user experience for the visitors.
Analytics
Analytical cookies are used to understand how visitors interact with the website. These cookies help provide information on metrics the number of visitors, bounce rate, traffic source, etc.
Advertisement
Advertisement cookies are used to provide visitors with relevant ads and marketing campaigns. These cookies track visitors across websites and collect information to provide customized ads.
Others
Other uncategorized cookies are those that are being analyzed and have not been classified into a category as yet.
SAVE & ACCEPT